Geri had her pitch down pat. Mom asked her for a map of South Dakota, and she produced one from behind the counter, then proceeded to take us on a tour of all South Dakota has to offer. I only half listened, studying the Department of the Interior brochure I picked up.

All the sites in the National Park System have similarly designed brochures. Black stripe down the side, with the name of the monument or park in white Helvetica. (Just kidding, it’s not Helvetica, it’s actually a NPS-designed font called Frutiger) I look for those, because I know they’re not for-profit tourist traps AND I know they’ll earn me another stamp for my National Park Passport book. And there, betweenÂ the flyers for Crazy Horse mountainÂ and the Rushmore Caves, was Minuteman Missile.

WAT. Sounded like Cold War stuff, and thereforeÂ seemed promising. ImmediatelyÂ off the freeway, so it wouldn’t add much onto our drive time.

I’m OBSESSED with stuff from the Atomic Age. I never got a chance to study the era in school (except a wee bit in Dr. Bailey’s Intellectual History courses, and some in Tess Tavormina’s Literature & Medicine class), so I’ve pieced together what I know from old magazines, ephemera, and books set in the time period. (The Green Glass Sea, Countdown, etc.)

So I asked a half dozen or so times throughout the day (we drove through Iowa and into South Dakota) if we could go, and by the evening I had a semi-promising “We’ll see” from my dad.

Funny thing about my dad. When I was little and it was his turn to tuck me into bed, I’d pepper the poor guyÂ with science questions and horrific what-if scenarios. His age-appropriate answers and reasonable level of patience are something I keep in mind these days when I’m working with my gifted students. “Where does space end?” “What happens if an astronaut gets out of the shuttle?” “What makes a hurricane?” “What’s happening with Desert Storm?” and, my personal favorite exchange, “What happens if a tornado comes while we’re eating?” “Then we’ll eat downstairs.”

Nuclear annihilation came up, too, I’m sure, but Dad never talked much about his personal experience living through the Cold War era â€” I knew he was 12 during the Cuban Missile Crisis, bypassed Vietnam because he was at Michigan State, and attendedÂ police academy at a time when officers were not terribly well regarded. But Thursday night as I shared bits ofÂ Wikipedia entries on the Minuteman Missile program out loud from my fold-out bed, I acquired a few new pieces of information.

Mom said she made it through the era with some level of willful ignorance, and she reflected that maybe Desert Storm upset her because she had residual anxieties from the Cold War.

Dad remembered his parents went to a home show, like the ones they have at the Novi Expo Center, to check out bomb shelters. “Of course we know now that the nuclear winter would have rendered all that useless,” he said. Then he turned the conversation back to the facts of science, explaining that the shelters were designed with zig-zaggingÂ channels that would cause the radiation to sink to the bottom, leaving the clean air to enter the shelter. 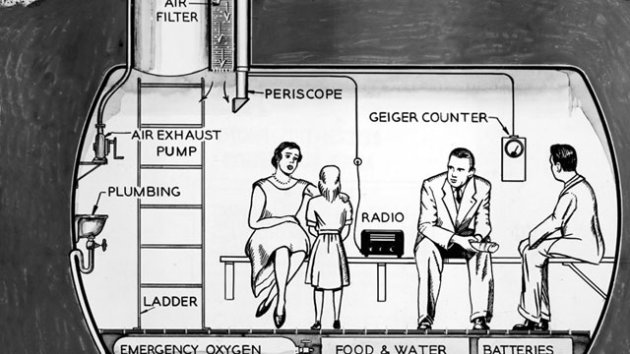 “Sure,” I asked, “But how did you live with that constantly on your mind and part of your world?”

“The general thought was that it was better to die than be under Communistic rule.”

Oof. No wonder so many folks in his generation are totally freaked out by liberal politicians. It was a very real feeling threat to them. Reading Eric Schlosser’s Command and Control gave me an even greater sense of the urgency at the time. Because not only did Dad have to live through it, it was part of his work too.

Detroit would have been one of the primary targets, he explained, as an automotive center and production site for all sorts of wartime goodies. Someone apparently calculated that 16 and Crooks was the most likely intersection for ground zero.

Speaking of malls, did you know they were designed to be SELF-SUFFICIENT POST-APOCALYPTIC COMMUNITY CENTERS?

I think one of the reasons I’m so drawn to the atomic age is its crazy intersection of science, politics, art, and advocacy. I’m interested in the parallels between that era and our current one. I’ve got a lot more thinking to do, but I’m so very glad Geri inadvertently alerted me to the Minuteman site.

(Today’s card was the Knight of Wands)