In preparation for my talk in Dallas this October, I’m trying to read all the available literature on integrating math and literature, and my first book is Exploring Mathematics Through Literature, compiled by the NCTM. 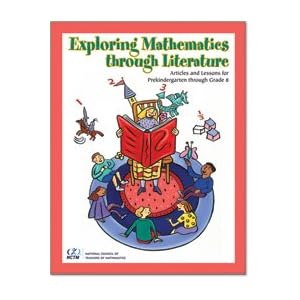 There are plenty of resources for basic connections between math and literature (such as graphing from information in books), but I’m interested in developing longer-term project-based learning around a book. In the introduction to the NCTM book, the editors list several basic ways to integrate math and literature.

So when I first read that list, I completely freaked out. Like almost barfed the calamari and lemonade I consumed while waiting for my husband to finish his MAGIC draft. That pretty much covers everything, I thought. I have nothing to add to the conversation of math and literature, I thought. SHOOT ME IN THE FACE, I thought. I AM GOING TO MAKE A TOTAL FOOL OF MYSELF IN FRONT OF HUNDREDS OF PEOPLE.

So then one of Toby’s geeky friends dumped a bunch of marble counters all over the lounge, and I realized that in the grand scheme of things, I was just fine.

In addition, I realized how to clarify my topic of “Deepening Math and Literature Connections.” All the books I see as examples in math lessons have some nugget of explicit math mentioned somewhere in them. And kids love that. When we read an excerpt from Little House in the Big Woods talking about unfair division of cookies, my students used that as an anchor example for weeks to come. So what do I have to offer that’s different?

I can show teachers how to see the math in books where concepts aren’t obvious. One of my favorite examples is the geometry-based assessment I made for Barbara Kerley’s What to Do About Alice? Whenever I do stuff like that, that’s when my colleagues throw up their hands and say “I don’t understand how you come up with stuff like that, Shannon.”

So now I have to figure out how I come up with stuff like that, and come up with it quickly. Because that’s at the core of what I want this conversation to be: it’s all well and good for the NCTM to publish AMAZING literature-based math units, but we really need to get math and literature to live together EVERY DAY in a sustainable way so teachers don’t feel overwhelmed….. As a newly-elected union rep, I believe I need to say, “It’s a workload issue.”

That gives me a little more focus…. Please come to Dallas. Please listen to me talk REALLY REALLY EARLY. It will be fun, I promise.